The of Badon Hill

army then defeats them at , 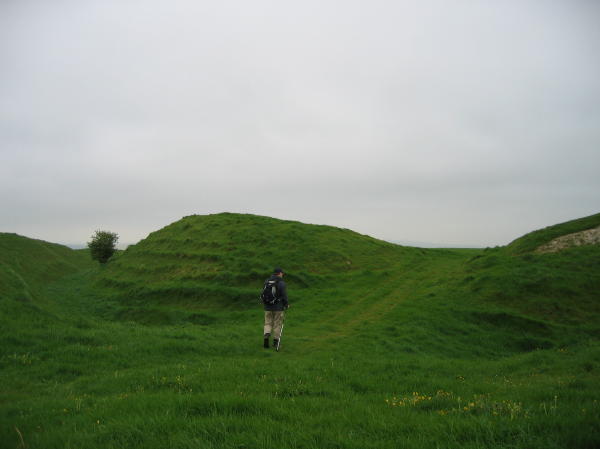 Near , . Av possible site for

the of Badon Hill

The Battle of Badon Hill (Celtic name Mynydd Baddon is an obscure battle which probably took place in what is now England sometime in the early 6th Century.

It was fought between the Celts led by a charismatic war leader that may have been King Arthur and the invading Saxons led by the warrior King Aelle who took Pevensey from the Celts in 491 and went on to found the South Saxon Kingdom which would now correspond to the English county of Sussex.

The twelfth battle was on Badon Hill and on which fell 960 men from one charge by Arthur; and no-one struck them struck them down save Arthur himself.

Gildas writing circa  540 CE also mentions the battle and says that it was a siege which indicates a fortified hill.

The exact location of the battlefield is not known, but it may have been near Badbury in Wiltshire,. There is an ancient iron age earthwork fort now called on a hilltop, just above the prehistoric road into Wiltshire. Badbury is just south of and close to where the A346 meets the M4 at junction 15

While the details of the battle are largely lost, historical evidence indicates that, when Aelle led a Saxon army west from his kindgom on a raid into Celtic held territory, he was ambushed by Arthur's smaller force.

When Arthur's troops sprang their ambush on the Saxon army, they pulled into a rough shieldwall along the roadway and fought desperately until sundown, when Aelle withdrew his battered troops to a nearby hilltop under cover of darkness.

In the morning, Arthur's troops were rested and had eaten. By contrast, the Saxons had spent the night on a steep, exposed hilltop without water or firewood. Rather than starve out the trapped Saxons, Arthur apparently chose to sweep them off the hilltop. At first light, the Britons started a series of charges up the hill.

Both sides engaged in a fierce battle for most of the second day, with the Celts charging up the steep hill and the Saxons countercharging down it. However, the battle ended near sundown when Arthur personally led a cavalry charge up the steep slope and broke the Saxon shieldwall, then rode down the fleeing Saxons until it was too dark to continue.

The of Badon Hill is relatively unknown, but it may have held up the Saxon advance into the Celtic kingdoms by a generation.

Other proposed sites for the of Badon Hill are the Badon Hill in , Lansdowne near and The Roman fort at Ribchester in .

Tekels Park to be Sold to a Developer

Concerns are raised about the fate of the wildlife as

Surrey, England is to be sold to a developer

for the Adyar Theosophical Society in England in 1929.

In addition to concern about the park, many are

worried about the future of the Tekels Park Deer

as they are not a protected species.

Many feel that the sale of a sanctuary

for wildlife to a developer can only mean

disaster for the park’s animals

Badgers have been resident

in Tekels Park for Centuries

Sir Ghalhad brought before the Round Table